The Concept behind Hindu Temples - a brief note

The Concept behind Hindu Temples - a brief note

Generally speaking, a temple is a 'Place of Worship'. It is also called the 'House of God'. However, for a Hindu it is both and yet still more. It is the whole cosmos in the miniature form. Stella Kramrisch defined temple as monument of manifestation in her The Hindu Temple. Hence, its morphology is not arbitrary. 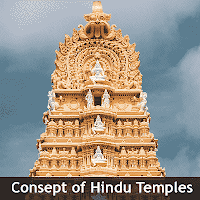 From the top to bottom the Hindu temple seeks to represent everything of which the cosmic world brahmanda (ब्रह्माण्ड), the entire universe, is composed of.

That is why on the walls of a Hindu temple one can see the representations of men, women, children, animals, birds, pests, insects, reptiles, trees, rivers, flowers, seas, mountains, houses, forts, places, villages, huts, etc., which constitute the earthly world. It includes even copulation among men and, among animals since it is through this mode of that creation takes place.

The Hindu temple architecture, i.e., its morphology, follows the requirements of his vision of the cosmos which he wants to recreate on the earth, it is not the fancy of the architect. Visions differ, therefore forms differ but forms are not experiments of architects. The temple also contains the images of gods and goddesses as well as semi-divine and mythical beings, including half-human and half-animal or half-bird and half-reptile forms, as described in Hindu mythologies contained in epics, Puranas, and kavyas.

The world of waters with fish, tortoise, crocodile, coral, plants, rocks, etc., which constitute the life below the seas is also represented. Underlying the these so simple yet so complex ideas is the water cosmology (origin of the universe) which means that water is the basis of all creation and it sustains all beings. It is for this very reason that from the Gupta times itself the temple pillars are shown emerging from कलश or water-pot, and the finial or top is embellished with a water-pot.

A Hindu may worship many gods at one and the same time since he believes that in whatever form or forms one my worship, all will eventually reach God, the only one, the ultimate reality 'as wherever the rain water from heaven may fall it goes to the ocean', similarly 'prayers offered to one and all gods go to God alone'.
\0