Boghazkoi inscription in Asia Minor, Indian Expansion and Connect with Outside World

Indian civilization was not always contained within its natural, geographical limits. It tended to spread and extend beyond them. An early example of this extension has been indicated in certain inscriptions discovered at an old site called Boghazkoi in Mesopotamia by the German archaeologist Hugo Winckler in 1907, and dated to about 1400 B.C. They record treaties between the kings of the Mitani and the Hittites. These were guaranteed by their gods called Mi-it-ra, U-ru-w-na, In-da-ra and Na-sa-at-ti-ia, corresponding to the Rigvedic Deities known as Mitra, Varuna, Indra and Nasatyas (the twin Asvins). Thus it has been assumed that Rigvedic Civilization was an established fact in India before 1400 B.C. so as to promote colonial, cultural and commercial activities up to a distant country like Mesopotamia. 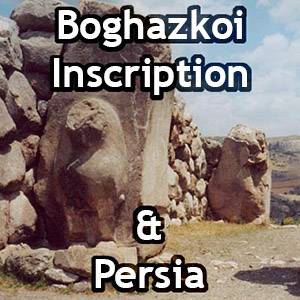 There are also other linguistic proofs of the spread of Indian civilization towards that remote region. The letters from Tel-el-Amarna mention Mitani princes bearing Sanskrit names like Artatama, Tusratta and Suttarna, while the gods of another people of that age, the Kassites (c. 1746-1180 B.C.), have names like Shurias (Sanskrit Surya) and Marytas (Marutas). The same antiquity of Vedic civilization is pointed to by the fact that Buddhism which arose about 600 B.C. had its origin in Vedic thought as represented in the four types of literature known as the Sutras, Aranyakas, Upanishads, and the Vedic Samhitas originating from the Rigveda as the primary work. All this literary and linguistic development required sufficient time which Winternitz estimates at about 2000 years from 600 B.C. so as to render Vedic civilization at least as old as 2500 B.C.

Connection with Achaemenian Empire of Persia

The next landmark in the history of Indian expansion is found in the two practically contemporary documents, Panini's grammar (called Ashtadhyayi) and the inscriptions of the Achaemenian emperors of Persia. Macdonell has assigned to Panini 500 B.C. as his latest date, while R. G. Bhandarkar supposed it to be as old as about 750 B.C.

The Achaemenid emperors of Persia who established connection with India were

It was Cyrus who first annexed the Persian empire, a part of India which is called by Herodotusas Gandarites (Gandhara). In his earlier Behistun Inscription, Darius I also mentions Ga(n) dara as a part of his empire. But in his later inscriptions, he adds to it Hi(n) dush (Sindhuh-Indus) along with its other part called Gadara (=Gandhara). Darius in his earlier Behistun Inscription mentions as his subjects both Yauna (Ionians) and Gadara Xerxes recruited for his army his Indian subjects called Gandharians and Indians to fight in Greece, as stated by Greek writers. These Persian contacts brought to India both Persian script and coins, Gold (Daric) and Silver (Sigloi). That is why Panini, as a native of Gandhara, was acquainted with this foreign Persian script which he calls by the generic name of Yavanani explained by him as the script of the Yavanas (Yavananam lipi). It was the Aramaic Script "which was introduced into India in the sixth century B.C. when the north-west was under Persian rule, and when Aramaic was used as a means of communication for the purposes of government throughout the Persian Empire. Buhler rightly conjectured in 1895 that originally the Aramaic language and alphabet was imported into Gandhara" (Rapson in CHI, I, 62).

Asoka, accordingly, used this Aramaic script for his inscription at Taxila for the benefit of his Yona (foreign) colony. It was not the colony of a remote people like the Ionians but of Iranians nearer home. The Aramaic Script produced the famous variety known as the Kharosthi Script which came to be used for the countries in North-Western India. Asoka mentions in his Rock EdictsV and XIII, the Yonas, Kambojas and Gandharas together as Aparantas or peoples on his frontiers. These frontier Yonas are to be distinguished from the subjects of the five Yona rajas or Greek Kings mentioned in RE II and XIII. They were Antas or neighbours, and not borderers or Aparantas. The former were independent and outside of the limits of the empire.

Again, Asoka calls his Governor Tushaspha as a Yavana-raja, an Iranian, and not an Ionian Chief. The Vishnupurana describes the Yavanas, and Kambojas by their repugnant social customs, eating beef, shaving head, and keeping beard, for which the Greeks were not known. The Markandeya Purana (Ch. 57) locates the Yava nas to the West (paschime yavanah smritah). The foreign peoples of the West were known by the generic term Yavana in Sanskrit. Again, in the old Buddhist canonical text of Majjhima Nikaya of about the 5th century B.C. there is a reference (II. 149) to Yona and Kamboja society and to other peoples of the frontier regions (annesucha pachchantimesu janapadesu) which knew only of two social divisions (dvevavanna) instead of four, viz. the class of employers (ayyo=arya) and employed (dasocha).