There is some evidence to show that India from very early times carried on trade by sea with several foreign countries. According to Dr. Sayce, the Assyriologist, Indian teak has been found among the ruins of Ur about 3000 B.C.while Sindhu or Indian muslin is mentioned in an old Babylonian list of clothes. This Sindhu or muslin, as pointed out by Hewitt, was brought to Babylon by sea and not by land by Zend-speaking traders who would have called it by the Zend term Hindu. A beam of Indian cedar has been found in the palace of Nebuchadnezzar (604-562 B.C.) and also Indian teak at a temple of Ur. 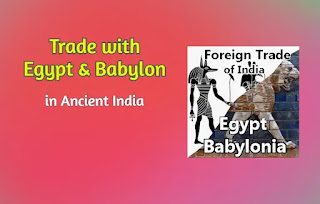 Trade between Ancient India and Babylon

The old Baveru-Jataka (c. Sixth Century B.C.) tells of import by sea to Babylon of the Indian peacock. As Buhler states: "This trade very probably existed in much earlier times, as the Jatakas tell of other voyages and mention old ports like Surparaka (Sopara) and Bhrigukachchha (Broach)." The Buddhist canonical work Digha-Nikaya (c. 5th Century B.C.) tells of ocean-going ships out of sight of land.

India also exported to Babylon rice and sandal-wood which were known to the Greeks by their Indian names before 5th Century B.C. Thus "the evidence warrants us in the belief that maritime commerce between India and Babylon flourished in the sixth and seventh Century B.C." (Kennedy). A.M.T. Jackson states that “the Buddhist Jatakas and some of the Sanskrit law books tell us that ships from Broach and Sopara traded with Babylon from the 8th to the 6th Century B.C.

Trade between Ancient India and Egypt

A vessel of Pharaoh brought to Egypt from India her products like "elephants' teeth, gold, precious stones, sandalwood and monkeys." Of Egypt have brought to light Indian products like "Indigo, Tamarind-Wood" According to Wilkinson, the tombs while, according to Lassen, "the Egyptians dyed cloth with Indigo and wrapped their mummies in Indian muslin."

The Bible also refers to some imports from India like precious stones in the Mosaic period (1491-1450 B.C.) and "ivory, garments, Armour, spices and peacocks" in the days of Solomon (c. 1015 B.C.). The thesis is thus summed up by Rev. T. Faulkes (IA, Vol. VIII):" The fact is now scarcely to be doubted that the rich oriental merchandise of the days of King Hiram and King Solomon had its starting place in the sea-ports of the Dakhan, which also exported to Egypt some of its esteemed spices."

Lastly, it may be noted that specimens of Indian ivory, ape and peacock are on view at the Tutan Khanem Collection of the Cairo Museum. Some of these exports from India like Peacock, Rice,Ginger, or Cinnamon were known in the West by their Tamil terms, e.g. Hebrew Biblical term tuki for peacock which corresponds to Tamil Tokei, as pointed out by Caldwell (Comparative Grammar of Dravidian Languages). He also says that the works of Pliny, Ptolemy and Periplus contain the largest stock of primitive Dravidian words.