Vrihadettar Bharat - The Greater India and its expansion during Mauryan Period, King Ashoka and spread of Buddhism on foreign land.

India achieved a remarkable expansion under the Maurya king, Chandragupta, who repelled the Greek invasion of Seleukos in c. 304 B.C. and annexed to his Indian empire the eastern part of the Syrian empire comprising the provinces of Gedrosia, Arachosia (Kandahar), Aria (Herat), and Paropamsidae (Hindukush), so that he came to rule over a Greater India which extended up to the borders of Persia. Accordingly, his grandson Ashoka calls the King of Syria Antiochus (Amtiyoka) as his immediate neighbour (Anta) in his Rock Edict II. As a result of increased interaction between India and Iran, there sprang up a large foreign settlement in the capital of India at Pataliputra, of which the Municipality had to constitute a special committee to take charge of its interests, as reported by the Greek Ambassador Megașthenes, deputed to the Mauryan Court.

This Indian interaction with Persia led Ashoka to recruit, as a friendly gesture, for his office of the Governor of the Saurashtra Province, the Yona Chief, Raja Tushaspha (a Persian name), in succession to the Indian Governor, Pushyagupta Vaisya, under Chandragugpta. 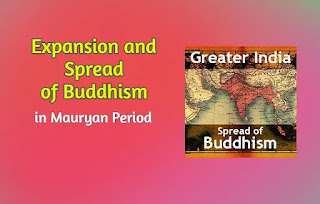 Spread of Buddhism during King Ashoka

India's foreign influence was very much increased and extended under Ashoka who regularly organized pacific missions, medical and cultural, for work in foreign countries for humanitarian programmes like treatment of diseases (Chikitsa) and also preaching the gospel of Peace and Non violence, the gospel of Dharma-Vijaya, the conquest of Truth, a conquest not of coercion, or violence, but of love (Priti) (RE. XIIN).

At the same time, according to literary evidence, foreign missions were despatched by a Buddhist Council (Sangiti) which met under Ashoka in the 17th year of his reign (c. 253 B.C.) in the royal monastery at Pataliputra in a nine months' session under an old Thera, Moggaliputta Tissa (who was conveyed to the capital comfortably in a ship on the Ganges and not in a jostling wheeled vehicle).

One of these Missionaries was a Yonaka named Dharmarakkhita, a Western Hindu, who was deputed to the Aparanta mentioned in R.E. VÌ and XIII as the land inhabited by the Yonas and Kambojas. Special attention was paid to the Himavanta-pradesa where five eminent Missionaries headed by Majjhima were sent to preach the most important doctrines of Buddhism as contained in the Dharma Chakra-Pravartana-Sutra. They included such famous preachers as Kasapagota and Dadabhisara whose names are also mentioned in inscriptions on relic-caskets at Sanchi, besides Majjhima. Thus the truth of the legends is confirmed by Inscriptions.

The remarkable fact of Ashoka's foreign missions is that by unprecedented self-sacrifice he deputed as permanent exiles his eldest son, Mahendra, and eldest daughter Samghamitra to work for the spread of Buddhism in the distant island of Ceylon. They were prepared for this religious mission by being duly ordained beforehand, Mahendra at the age of 20, in the 6th year of Ashoka's reign (in 264 B.C.), and his sister at 18. Mahendra took 3 years as a monk to master the three Pitakas under Moggali as his Upadhyaya, while his sister was educated for the mission by Directress Dharmapala and the teacher Ayapala, (V. 204-210, Mahav.I. As pointed out by Vincent Smith, considering the close cultural relations thus established between India and Ceylon (Tampraparni), we must credit Ashoka with a sea-going fleet as the instrument by which these relations could be maintained in these early days.

Lastly, we must note a most interesting fact attesting the extension of India's influence towards the West in certain countries of Europe. Ashoka himself states in his Rock Edict XIII that his pacific missions, medical and cultural, were despatched by him to the five select countries of Europe then under the following Kings as his friends:

As regards the Medical Missions, Ashoka states in his Rock Edict II that both within his own dominion (Vijite) and in the States on his borders (prachamtesu) both in and out of India, the States of the Cholas and Pandyas, Satyaputras, and Keralaputras, and as far South as Tambapamni (Tampraparni), and also in the States of the neighbouring King Amtiyoka, and the States of his neighbours (Samipam or Samanta rajao) up to a distance of 600 yojanas, everywhere (Sarvatra), he has instituted (Kata=Krita) measures of medical treatment (chikitsa) of both men and animals (Manusapasu-chikitsa), with provision of medicines (Osadhani) and their sources in the roots (mula) and fruits (phala) of medicinal plants imported (harapita) from abroad or grown (ropapita) in the country.

The next important evidence of India's expansion overseas is furnished about six centuries after Ashoka in the famous Allahabad Pillar Inscription of Emperor Samudragupta. It states how the peoples inhabiting Simhala and all other islands "overseas" (constituting what has been aptly called Dvipantara-Bharata) (Samhalaka-dibhischa sarvadvipavasibhih) acknowledged the suzerainty of Samudragupta by rendering to him all kinds of service (Seva) comprising of following.

They thus entered into treaties of Alliance and Service by which they were protected against aggression by 'an all powerful emperor who brought the whole of India under his sway by the prowess of his arms' (bahuvirya prasaradharani bandhasya).

The inclusion of Ceylon in Samudragupta's imperial system and sphere of influence is further proved by literary evidence. According to the Chinese author, Wang Hiuen-tse, a King of Ceylon named, Chi-mi-Kia-po-mo (=Sri Megha-Varman or Varna whose time was A.D, 350-380) cultivated cordial relations with Samudragupta to whom he sent an embassy with gifts for a proposal that he be permitted to construct at Bodh-Gaya a Monastery for the residence of Ceylonese pilgrims to that holy place.