Methods to prevent rusting of iron pillar in Qutub Minar 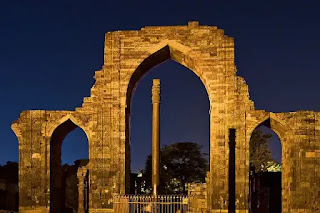 One of the metallurgical masterpieces is the Iron Pillar at Qutub in Delhi made of material which is pure, rustless, malleable iron, a standing monument which has defied for more than a millennium the ravages of time, the wear and tear of weather and the attack of oxidation. Its composition was examined by a Committee of Experts who have held that it was beyond the capacity of any Iron Foundry of that age (c. 400 A.D.) to produce such a finished metallurgical masterpiece.

India also produced the steel of which was made the famous Damascus blade: The Brihatsamhita of Varahamihira mentions a particular preparation of cement which is described as Vajralepa, 'cement strong like the thunderbolt'. It was this enduring cement which must have gone into the making and strengthening of the joints of the Ahsokan Pillar which still stands four-square to the winds through more than 20 centuries at Nandangarh where it braved the earthquake of 1934, which laid low the palaces of kings and razed to the ground many a solidly-built city.

Another metallurgical masterpiece of ancient India is the Sultanganj colossal image of the Buddha in copper. "It is made of very pure copper, cast in two daggers over an inner core by a sort of circ perdu process. It is 7 feet high and weighs about a ton. A people which was capable of producing such works in stone and iron must have attained considerable proficiency in metallurgy and engineering" [p. 338 of Legacy of India, (Oxford)].