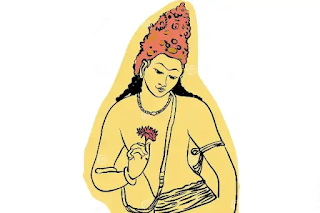 Ajanta Caves, the finest surviving examples of Indian art, particularly painting are named after a nearest village by name Ajanta. These caves were excavated in horse-shoe shaped bend of rock scarp nearly 76 m in height overlooking a narrow stream known as Waghora. In all 30 caves were hewn out of the living rock in different periods according to the necessity. Out of these, five (cave 9,10,19,26 and 29) are chaityagrihas and the rest are viharas.

Chronologically and style wise these caves can be divided into two broad groups. Out of the 30 caves 6 caves belong to the earliest phase of Buddhism i.e. Hinayana. Caves 9 and 10 (chaityagrihas) and 8, 12, 13 and 30 (viharas) belong to this phase. These caves are datable to the pre-Christian era, the earliest among them being Cave 10 dating from the second century BCE where the object of worship is a stupa.

These caves are imitation of contemporary wooden architecture even to the extent of fixing of wooden rafters and beams to the ceiling even though they are non-functional. These early caves were painted but nothing substantial has survived. Cave 9 and 10 clearly show some vestiges of paintings. The headgear, ornaments of the images in these painting resemble’s to the bas-relief sculptures of Sanchi and Bharhut. During the period of Vakatakas, the contemporaries of the Imperial Guptas majority of the caves were excavated and also by their feudatories owing allegiance to the Vakatakas. Varahadeva, the minister of Vakataka king Harishena (475-500 CE.) dedicated Cave 16 to the Buddhist Sangha while Cave 17 was the gift of a prince Upendragupta, a feudatory of the same king. A flurry of activity at Ajanta was between mid-5th century CE to mid-6th century CE.

Hieun Tsang, the famous Chinese traveller who visited India during the first half of 7th century CE has left a vivid and graphic description of the flourishing Buddhist establishment, here even though he did not visit the caves. A solitary Rashtrakuta inscription in cave 26 indicates its use during 8th - 9th centuries CE.

All these caves were once painted but now the best examples of these classic paintings of Vakataka period could be noticed in caves 1, 2, 16 and 17. The main theme of the paintings is the depiction of various Jataka stories, different incidents associated with the life of Buddha, and the contemporary events and social life. The ceiling decoration invariably consists of decorative patterns, geometrical as well as floral.

Apart from painted representation, sculptural panels also adorn the beauty of the caves. Ajanta paintings are the best example of tempera technique, executed after elaborate preparation of rock surface. After chiseling rock surface, different layers of clay mixed with ferruginous earth, sand, fibrous material of organic origin were applied very carefully. Then the surface was finally finished with a thin coat of lime wash. Over this surface, outlines are drawn boldly, then the spaces are filled with requisite colours in different shades and tones to achieve the three dimensional effect of rounded and plastic volumes. The pigments used for the paintings are kaolin, shell white, lead white, red ocher, yellow ochre, lapis lazuli etc.

The group of caves is inscribed by the UNESCO as World Heritage Monument in the year 1983.
\0