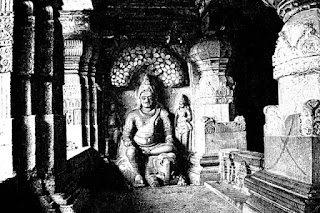 Ellora or Elapura as known from the Rashtrakuta inscriptions is said to have been their capital for a brief period. The earliest reference to the caves dates back to 10thcentury CE by an Arab geographer, Al-Masudi. In 1352 CE Sultan HasanGangu, a Bahamani ruler visited the caves, for whom, the approach roads were repaired. The Marathi literary works such as Lilacharitra of Mahimbhat and Amrutanubhav of saint Jnaneshwar also mention about these caves. The caves are hewn out of the basaltic rock of the Deccan trap. The caves are datable from 6th century CE to 11th century CE In total, there are more than 100 caves in the Ellora hill range out of which 34 caves are mostly visited by the tourists. These caves are located on the western face of the ridge of the Ellora range and spread over for one and half kilometers from one end to the other in south north direction. Most of the caves face west, while the Jain group of caves faces to south. Out of the 34 caves, caves 1 to 12 are Buddhist, caves13 to 29 are Brahminical and caves 30 to 34 are Jain.

The developments in Buddhist Caves are ascribed to 450 to 650 CE. These two groups consist of a single Chaityagriha or the prayer hall and monasteries. The cave 5 is the largest and noteworthy among the early group of caves at Ellora. Among the second group (cave 6 to 12), the Teen Taal is the biggest and elaborate and cave 10 which is chaityagriha also known as Vishwakarma Cave or Sutara chi zopadi (carpenter’s hut) are most important and noteworthy. It houses a huge seated Buddha image in dharmachakrapravartan mudra carved over facing of the stupa.

There are 17 excavations belonging to the Brahminical faith at Ellora, excavated out of the west face of the hill for nearly a km in length and datable from about 650 to 800 CE. The main example of this group are cave 13, Ravankikhai or the abode of Ravana, cave 15 Dashavatara cave or the cave of ten incarnations of Vishnu; Cave 16, the far famed great Kailas; Cave 21, Rameshwar; Caves 29, Dumarlena. Out of these 17 only Cave 15 bears inscription of 14 lines praising the great king Dantidurga (Saka Era 675-around 753 CE) and Lord Siva, Parvati,Sarasvati and records genealogy of the Rashtrakuta family. The Cave 16 marks the departure from all earlier conventions in which a huge mass of rock was separated from the parent rock formation first and then it was sculpted and carved into a huge temple from top to bottom. Kailas was excavated under Krishna 1st (756-775 CE) the Rashtrakuta monarch. The Kailas has an entrance gateway, an intermediate Nandi shrine, the temple, and the cloisters surrounding the courtyard. The main body of the temple is a huge parallelogram with the principle shrine excavated on the first floor. The level corresponding to the lower story consists of a series of moldings executed one above the other. In general the Kailas temple follows the Dravidian style of architecture. The massive plinth is occupied by boldly carved elephants and lions. Episodes from the Mahabharata and Ramayana are also sculpted on the walls of the plinth. The principal shrine proper rises to a height of nearly 23 m over the plinth with four subsidiary shrines all fashioned out of the rock making the temple a kind of panchayatana on plan. The interior of the shrine consists of pillared mandapa, an antarala and a garbhagriha. Remnants of paintings are also seen on the ceiling of the portico. The original paintings have survived at very few places. The entire structure was given externally a lime plaster with wash and painted with ochre colored paintings during the period of AhilyabaiHolkar (18th century CE). Another important excavation is the Dumarlena (cave 29), which consists of an isolated shrine located within a hall arranged on a cruciform plan.

The Jain group of caves is from cave 30 to 34, which probably started around 800 CE and continued till 11th century CE. Out of the five excavations; cave temple 30 is known as Chhota Kailas. The other two important ones are the Indra Sabha (cave 32) and the JagannathSabha (cave 33). An interesting factor seen between cave nos.32 and 33 is an interconnecting passage on the first floor provided also retained some of the finest mural paintings of the later period in Maharashtra. Cave 32 houses a life size monolith elephant in the court yard opposite to a 9.4 m high Manas Stambha. Ellora’s spectacular architectural and sculptural exuberance and its religious harmony is listed as World Heritage Monument by the UNESCO in 1983.