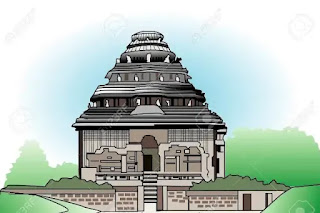 Konark (Lat. 19°53’ N, Long. 86°06’ E), a small town to the south of Mahanadi delta in Puri district is situated on the East coast of India. It owes its singular distinction to the Sun Temple. The place is well connected by all weather motorable road either from Bhubaneswar (65 kms) or from Puri (40 kms).It is one of the principle kshetras mentioned in the Kapila Samhita. It is also known as Padma-Kshetra or Arka-Kshetra.

The term Konark is attributed to the words Kona and Arka, meaning angle and sun respectively. Hence the meaning is ‘at the angle of the sun.’

Built in the 13th century CE by the king Narasimhadeva-I (1238-1264 CE) of the Ganga dynasty, the patron deity of this temple was Sun or Arka. The image of Sun was worshipped in the garbhagriha. Now it is no more. The temple stands on the shore of Bay of Bengal and gets the first rays of the rising sun on its main entrance. The Europen mariners called the temple “Black Pagoda”, which helped them as a landmark during sea voyages. This great edifice has been included in the list of World Heritage monuments by UNESCO in 1984.

The temple marks the culmination of art and architecture of mediaeval Odisha. It resembles a colossal chariot with 12 pairs of wheels lavishly sculpted with symbolic motifs and is pulled away by seven sprinting horses. The temple comprises of several distinct and well-organised special units viz. the deul or the sanctum surmounted by a high shikhara which no longer exists; the jagamohana or audience hall, which is presently sealed and filled with sand and rubbles and the detached natamandira or dancing hall on a high platform, now without a roof. In front of the eastern flights of steps of the jagamohana, there was a pillar installed, called the Arunastambha. It was shifted to Puri by the Marathas and was reinstalled in front of the simhadwar of Jagannath Temple, Puri.

While laterite is used in the foundation, core areas and for the prakara, the outer enclosure of the temple in veneered with khondalite. The sculptures have been chiselled out of khondalite and chlorite. The sanctum, jagamohana and the natamandira are enriched with sculptural and ornamental profusion. Mighty gajasimhas welcome visitors at the porch. The sanctum displays elegant images of the sun god in the three projections on the south, west and north sides representing the parshvadevatas of Sun. The roof of the jagamohana harbours colossal figures of female musicians. The walls of the temple contains super carvings of divine, semi-divine, human and animal figurines amidst flora and geometric ornamentations. Different themes like agricultural practices, hunting scenes, scenes from daily life, military processions, war scenes and endless varieties of animals including the African animal giraffe are depicted. Musicians, dancers, erotic couples, vivacious kanyas absorbed in several gestures and actions are also depicted as sculptural reliefs on the walls of the temple.

At present the temple is in ruins but the jagamohana is quite intact. Though in ruins, it testifies its former grandeur unrivalled by any other temple in the world. Grand in its conception, great in its beauty and high in its stature, it stands out as the most notable marvel of Odishan art.

Several other subsidiary structures are also found within the enclosed area of the rectangular prakara. Among them, the Mayadevi and Vaishnav brick temples are worth mentioning.

The small brick temple facing east, located in the south-west corner of the compound was discovered in 1956 during the sand clearance work. Also called Temple no. 3 it is pancharatha on plan. It consists of a deul and a jagamohana, but the super structure is missing and it is also devoid of any exterior decoration. Images of Balarama and two Parshvadevatas viz. Varaha and Trivikrama were unearthed (now displayed in the Archaeological Museum, Konark) which speaks about its Vaishnav affiliation. The temple is datable to circa 11 th century CE. The monument and museum remain open from sunrise to sunset. Entry fee is charged separately for both.